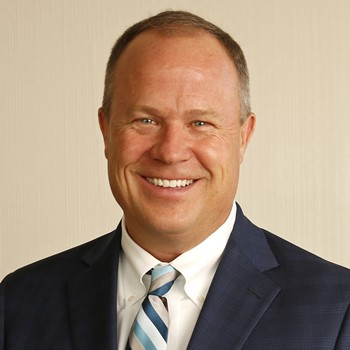 Mark’s trial work at Larson King, LLP focuses on litigation of product, professional, oil & gas and transportation liability matters. Mark is a partner and serves on the firm's executive committee.

Mark has served in leadership positions for state and national defense organizations for many years. He served as the President of the Minnesota Defense Lawyers Association (2011); as Chair of the DRI Trial Tactics Committee (2006-2008); as Co-Chair of the MDLA Nursing Home & Assisted Living Committee (2006) and as Chair of the USLAW Network (2008); Member, DRI Law Institute Committee - Drug & Medical Device, Trial Tactics, Retail and Professional Liability (2011-2014); Co-Chair of USLAW's Product Liability Committee (2016 - present). In addition, Mark served on the Board of Directors for the Regions Hospital Foundation (2012-2014).

Mark and his wife, Christine, keep busy with their three daughters.  As a family, they enjoy spending time at their cabin in northern Minnesota where Mark was born and raised.  An avid outdoorsman, Mark loves to hunt, fish and hike.

Honors & Awards
Named yearly since 2009 in The Best Lawyers in America- Product Liability (based on an exhaustive peer review survey comprised of 2.5 million confidential evaluations);  "AV Preeminent" rated by his peers in Martindale Hubbell, the highest lawyer rating for both skills and ethics; named to America's Top 100 Attorneys in 2016; named as one of the Attorneys Of The Year by Minnesota Lawyer in 2012; listed as a "Super Lawyer" by Minnesota Law & Politics yearly since 2000 (representing the top 5% of Minnesota lawyers); named in the Top 100 "Super Lawyers" in 2008, 2016 and 2017; named "Rising Star" by Minnesota Law & Politics 1996-1999; Hamline University Athletic Hall of Fame, Football Team.