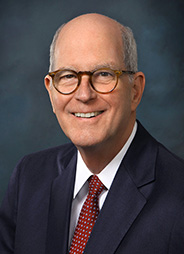 As Managing Partner, Richard P. Cole is responsible for the overall management and supervision of the firm. He is recognized as a Florida Leading Attorney in the areas of personal injury defense law, medical, legal and professional malpractice. Mr. Cole has experience handling Errors and Omissions claims, including those brought against insurance brokers and agents. He received his Bachelor of Science degree in Business Administration from the University of Florida and his Juris Doctor from the University of Florida College of Law where he was ranked sixth in his graduating class. While attending law school, Mr. Cole was Student Body President, Chief Justice of Traffic Court and was named to “Who’s Who Among American College and University Students.” He was also a member of Florida Blue Key.

Mr. Cole is a Martindale-Hubbell AV-rated Preeminent attorney. He is a member of the American Bar Association, AIDA Reinsurance & Insurance Arbitration Society and The Florida Bar. He is a past Director, Secretary, Vice President, and President of the Dade County Bar Association and a past Delegate to the United States Eleventh Circuit Conference.

He is a past Director of the Dade County Defense Bar Association. He is a member of the American Board of Trial Advocates (President, Miami-Dade Chapter 2004) and Senior Life Fellow of ABOTA, American Inns Of Court, the American Arbitration Association, the Legal Malpractice and Medical Malpractice Committees of the International Association of Defense Counsel, the Association of Past Bar Association Presidents of Florida and the Defense Research Institute. He is an Advisory Committee member of the Volunteer Lawyers’ Project for the Southern District of Florida. He was Vice Chairman and Chairman of the Grievance Committee, United States District Court, Southern District of Florida and a Member of the Eleventh Circuit Historical Society. Selected as one of the Top 1.7% of Civil Trial Lawyers in the State of Florida by Florida Trend Magazine (2005-2008); The Best Lawyers in America (2006-2018); Florida Super Lawyers (2006-2016); Lifetime Achievement Selection to America’s Top 100 Attorneys®; Member, Council on Litigation Management (Advancing Ethics, Cooperation and Education); and Member Attorney of the Council on Ethical Billing.